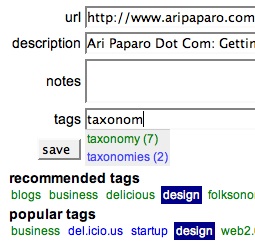 Ari Paparo has some interesting notes on what made delicious succeed where his company (doing essentially the same thing in 1999 with 13 million dollars) failed. Two things that really resonated with me were: defaults matter and folders suck.

Ari’s site blink.com made bookmarks private by default but allowed users to share them–whereas delicious makes them public. This encouraged looking at the bookmarks globally as the purpose of the service, whereas with blink it was an afterthought.

What Ari says about why folders suck was so good I’m going to take the liberty of just quoting a big chunk of it.

We believed that users would not only make their folders public, but also would categorize those folders into a directory structure. We called this the “Public Library” and created a Yahoo-like node structure on which users could post. This could have made sense since categorizing folders would be less work than categorizing individual bookmarks – after all, the folders were already “categories” of a sort.

There were several severe problems with this folder-based approach. First, people are very bad and inconsistent at organizing things. One day etrade.com will go into the “finance” folder and another day it will go into the “favorite links” folder. We were taking this fundamental flaw and squaring it – asking users to use graph their existing categorization onto a second arbitrary structure within the public library. Does my “finance” folder go into the “Business” directory or the “Personal” directory?

Then there was the issue of how deep to go when categorizing folders. If I’ve got a folder of “online brokerages” do I put it in the directory at the level of “Finance” since my folder is in a sense a sub-category of finance, or do I put it within the pre-existing “Finance -> Brokerage” directory? Users were confused, and with good reason.

Even librarians aren’t always that great at categorizing things. We need lots of rules, and don’t always remember to follow all of them. It’s a tricky business :-)

Case in point I don’t even use the tag “taxonomy” consistently (see screenshot above). delicious has a new feature that provides guidance on what tags you’ve used, and how many times – when you are typing in a tag. This is extremely handy for displaying just how inconsistent I am…and how to improve the quality of my tags.