In this week’s seminar we left the discussion of information and began looking at the theory of design writ large, with a few focused readings, and a lecture from Professor Findlater. One of the key things I took from the lecture was the distinction between User Experience and Usability. The usability of an object speaks to its functionality, and how easy it is for people to use it. User Experience on the other hand is more of an affective measure of how users perceive or think about the device, which may not always be congruent with it’s usability. It’s an interesting distinction, which I wasn’t really conscious of before.

Speaking of distinctions, we spent a fair bit of time talking about the first chapter in Don Norman’s The Design of Everyday Things. Norman is well known for popularizing the term affordance in the HCI community. He borrowed the term from the psychologist James Gibson. We read from Norman’s revised edition from 2013–the original was published in 1988. In chapter 1 it seems that Norman has a bit of an axe to grind because of how affordance had been used in the literature to denote a relation between an object and an organism, as well as a perceived affordance or what he now calls a signifier. This might seem like splitting hairs a bit, and perhaps a bit quixotic after the term affordance has been out in the wild for 25 years–but for me it made some sense. I know everyone didn’t but I appreciated his sometimes acerbic tone, especially when he was berating General Electric for its continuously flawed refrigerator controls.

A good example came up in class of a student who recently moved and needed to buy a couch. She is tall, and often likes sleeping on a couch. So she was looking for a couch that would be easy to sleep on. Specifically she wanted a couch with arm rests that could also serve as pillows, because she is tall. For example compare these two couches: 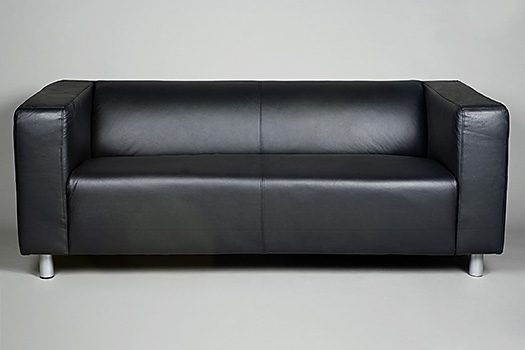 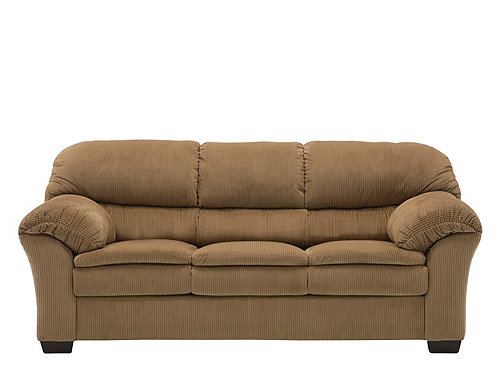 Being able to distinguish between the relation between the object and the person, and the sign of the relationship seems important–particularly in cases where the affordance exists but is not known, or when it appears that the affordance exists, but it actually does not. I’m thinking of controls in a user interface that appear to do one thing, but do something else, or do that expected thing as well as something unexpected. I can see why HCI people would have reacted negatively to Norman telling them they were using the term wrong. But since I’m new to the field I don’t have that baggage I guess :-)

A few other things that came up in discussion that I will note down here to follow up on at some point are:

In the second part of the class we had a writing workshop where we discussed writing we liked, writing strategies (since we’ll be doing lots of that in the PhD program), as well as ways to get started writing when you are stuck.

We all brought in examples of writing we liked, and talked briefly about them. I brought in Jackson & Barbrow (2015) as an example of what I thought was a well written paper. I like it because it is strongly grounded in enthographic research (admittedly something I want to learn more about), and discusses a topic area that I am interested in: ecology, measurement and standards. I thought the paper did a good job of studying behavior around standards at different scales: the individual team of researchers out in the field, and the large scale national collection of data. Jackson included numerous quotes from individuals he observed during the study, which added additional authentic voices to the paper. He also quoted Borges in an useful/artful way. I thought it was also very interesting how standards were presented as things that we should consider as a design factor in Human Computer Interaction. The very idea that seemingly invisible and dull things like standards (how they live, and what they omit) could be useful in design is a fascinating idea to me. I liked the illustration that while measuring the environment seems like a precise science, it has a human/social component to it that is extremely important. Finally, I’ll admit it: I brought the paper because it won an honorable mention best paper award at CHI – and I’m a fan of Jackson’s work.

After we all talked about our favorite papers we discussed writing strategies or techniques to be aware of:

Ways to get started

We also talked about ways to get started writing when it is difficult to get going:

Here are my random notes I took while doing the readings for this week. They haven’t been cleaned up much. But I thought I’d keep them here just in case I need to remember something later.

When doing the readings we were asked to pay particular attention to these questions:

This study is built upon a useful foundation of existing research on bodystorming, and seems to provide a useful introduction to the concept. It also usefully highlights through concrete examples how bodystorming is different from brainstorming. The goal of the study seems to be to be explore two hypotheses, that are introduced at the end of the paper (I think they should’ve been included earlier):

The authors mentioned a third hypothesis, which was to evaluate whether bodystorming on site provided immediate feedback about design ideas. But to me this seemed like a very minor variation on the speed of the design process.

They attempted to study these questions by analyzing the designs generated by 4 different case studies where bodystorming was used and a more traditional brainstorming case study. The setting of the bodystorming was varied: on site, similar site, office space, office space with acting. It also seemed like different types of documentation (user stories and design questions) were used in each scenario. This seemed to be changing more than one variable, and complicating the ability to draw conclusions. The authors mention that the results were somewhat complicated because designs from one of the bodystorming sessions seemed to inform other sessions. This was strange because they mention elsewhere that the case studies included different participants; but they couldn’t be all different if this sort of learning took place?

The findings themselves were inconclusive, and admittedly somewhat shallow. Although some of the anecdotes regarding site accessibility, level of exhaustion, inspiration and memorability seem like they would be fruitful to explore in a more controlled manner. It felt like this study was trying to do an experiment, but really did a much better job of presenting the ideas of bodystorming in the context of the literature, and providing a useful set of case studies to delineate how it could be used.