This week we focused on issues of privacy with Jessica Vitak after reading Palen & Dourish (2003), Vitak & Kim (2014) and Smith, Dinev, & Xu (2011). Of course privacy is a huge topic to tackle in a couple hours. But even this brief introduction was useful, and really made me start to think about how important theoretical frameworks are for the work I would like to do around appraisal in web archives.

Notions of privacy predate our networked world, but they are clearly bound up in, and being transformed, by the information technologies being deployed today. We spent a bit of time talking about Danah Boyd’s idea of context collapse that social media technologies often engenders or (perhaps) affords. Jessica used the wedding as a prototypical example of context collapse happening in a non-networked environment: extended family and close friends from both sides (bride and groom) are thrown into the same space to interact.

I’m not entirely clear on whether it’s possible to think of a technology affording privacy. Is privacy an affordance? I got a bit wrapped around the axle about answering this question because the notion of affordances has been so central to our seminar discussions this semester. I think that’s partly because of the strength of the Human Computer Interaction Lab here at UMD. Back in week 4 we defined affordances as a particular relationship between an object and a human (really any organism) that allows the human to perform some action. Privacy feels like it is more of a relation between humans and other humans, but perhaps that’s largely the result of it being an old concept that is being projected into a networked world of the web, social media and big data. Computational devices certainly have roles to play in our privacy, and if we look closer perhaps they always have. 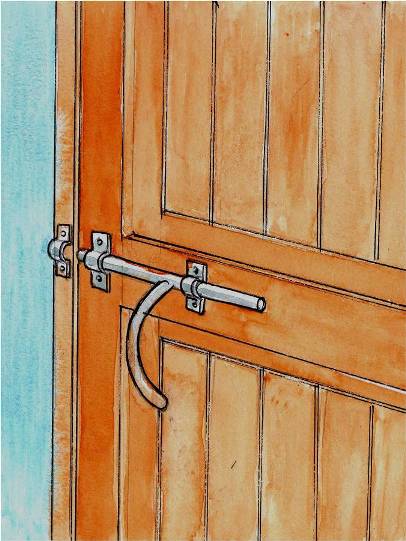 Consider this door with a lock. Let’s say it was the door to your bedroom in a house you are renting with some friends. Imagine you want to get some peace and quiet to read a book. You can go into your room and close this door. The door affords some measure of privacy. But if you are getting changed and want to prevent someone from accidentally coming into your room you can choose to lock the door. The lock affords another measure of privacy. This doesn’t seem too much of a stretch to me. When I asked in class about whether privacy was an affordance I got the feeling that I was barking up the wrong tree. So I guess there’s more for me to unpack here.

General privacy as a philosophical, psychological, sociological, and legal concept has been researched for more than 100 years in almost all spheres of the social sciences. And yet, it is widely recognized that, as a concept, privacy “is in disarray [and n]obody can articulate what it means” (Solove (2006), p. 477).

Privacy has so many facets, and is so contingent on social and cultural dynamics that I can’t help but wonder about how useful it is to think about it in abstract terms. But privacy is such an important aspect to the work I’m sketching out around social media and Web archives that it is essential that I spend significant time following some of these lines of research backwards and forwards. In particular I want to follow up on the work of Irwin Altman and Sandra Petronio who helped shape communication privacy management theory, as well as Helen Nissenbaum who has done work bridging this work into online spaces Nissenbaum (2009) and Brunton & Nissenbaum (2015). I’ve also had MacNeil (1992) on my to-read list for a while since it specifically addresses privacy in the archive.

Maybe there’s an independent study in my future centered on privacy?