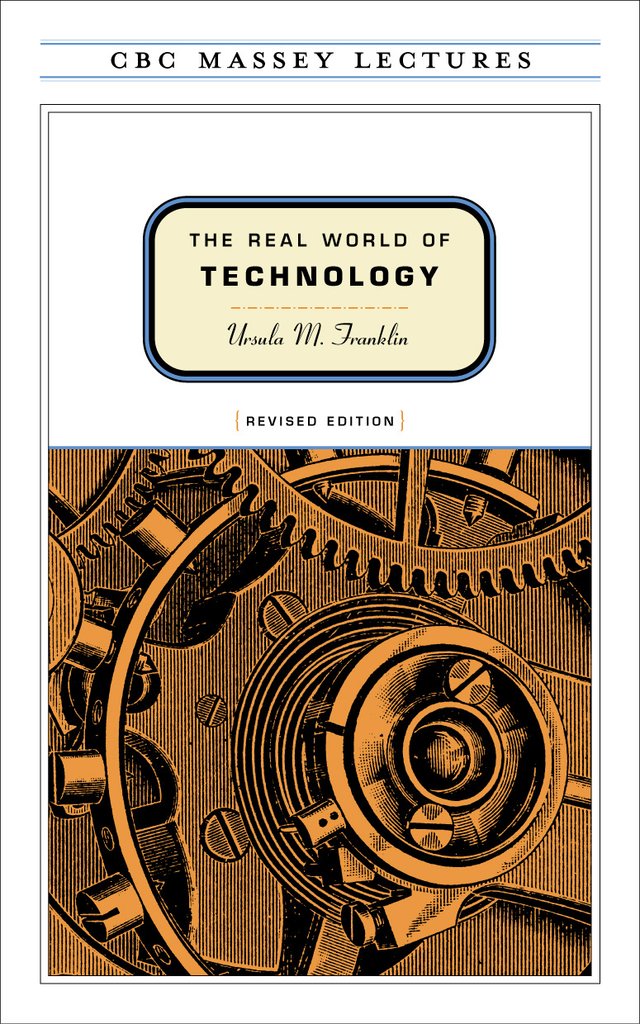 I just got finished listening to Ursula Franklin’s The Real World of Technology lectures from 1989. I’m kind of embarrassed to admit that I didn’t know about her work until the news of her passing went around in social media a few weeks ago.

There are five lectures in all, each an hour long, which can be streamed directly for free. I ended up downloading the mp3s that the flash player uses so I could easily listen to them on my commute to work. If you’d like a copy get in touch. If you prefer there is a book too … but you’ll be missing out on Franklin’s delivery, which is a big part of the wit and warmth of the lectures.

The lectures are ultimately about re-centering technology on the needs of people, rather than capital markets, the machinery of war, and natural destruction. Even with a gap of 30 years her message still rings clear as a bell today. We’re in the middle of talking about principles or values at work, so when Franklin talked about her own principles I wanted to jot them down. You probably will need to listen to the lectures to get at the meaning behind words like, but I imagine they will mostly make sense.

I can’t emphasize enough that we need a great deal of principled discourse. That discourse is political, in the sense that feminists say the personal is political. The discourse should be authentic in the sense of giving priority to experience and to genuine and verifiable information rather than to hearsay. It should seek out those with direct experience, those on whom technology impacts.

One needs also to pay particular attention to the language of this discourse. A lot of clarification can occur by simply attending to the language. Whenever somebody talks to you about benefits or costs of particular development don’t ask what benefits, ask whose benefits, whose costs. To come back to the discourse that we have to have with each other: on the basis of these discussions we could make up a checklist … let’s make a civic list. When one looks at projects that are under discussion … one can ask: