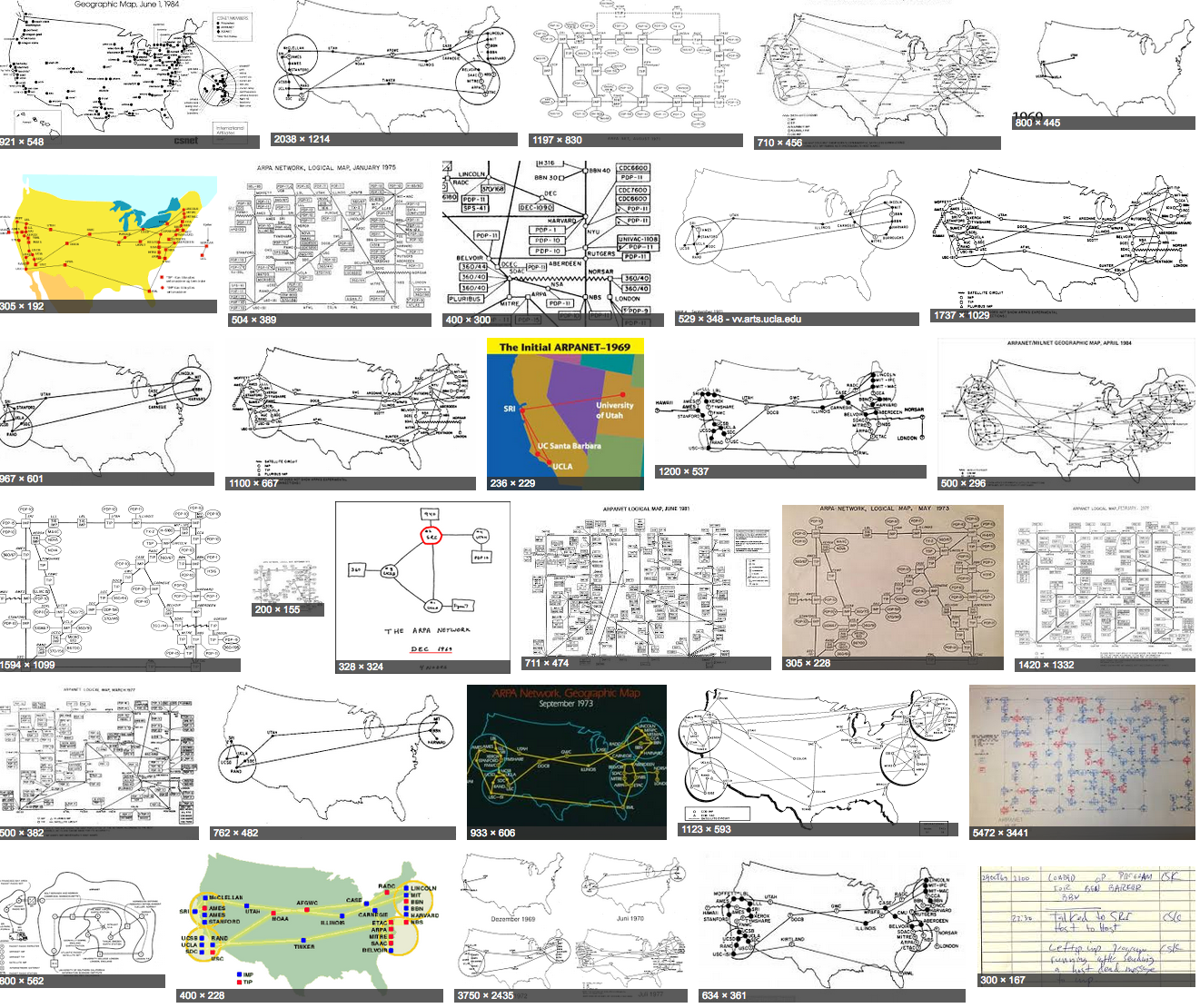 Screenshot of images of Arpanet Maps from Google Images

If you enjoy reading about the relationship between data and metadata and/or the history of the Internet you’ll definitely want to check out Bradley Fidler and Amelia Acker’s excellent paper Metadata, infrastructure, and computer-mediated communication in historical perspective (Fidler & Acker, 2016). If you need a copy drop me an email.

In this paper Acker and Fidler develop the idea of infradata which is a specific kind of metadata that is required to maintain infrastructure. They use this idea to examine the evolution of the Arpanet by taking a close look at the development of the Host/Host Protocol that allowed computers to connect to each other. The source for this history is found in the IETF RFC’s many of which were originally circulated in hard copy but have been digitized and made available online.

In my work with metadata as a software developer I’ve always been biased to metadata that is immediately useful. I’ve found focusing on use helps ground and scope discussions about what metadata standards should be. For example during my work on the National Digital Newspaper Project I had to work with a data specification that was quite complicated, and (I felt) raised the bar unreasonably high for data producers (awardees). I worked on a team that built a website that provided access to the historical newspaper content. In building that application we only used a small fraction of the metadata that awardees were required to produce. The specification struck me as unnecessarily complicated at the time, and perhaps it still is.

But maybe I was overly focused on the infradata, or the data that was required for me to build an access system, and not seeing the larger picture that includes the (sometimes unknown) requirements of digital preservation. Future scenarios when knowing what camera was used to image the microfilm frame was actually important are easy to talk about, but they can also expand to fill up all available space.

At the time I comforted myself with the idea that “digital preservation is access in the future” (Summers, 2013) and therefore focusing on access in the present was the best way to ensure preservation. But now I’m not so sure. This idea of infradata highlights that while some metadata is actively used to maintain the system it is a part of, not all of it is, or necessarily should be.

Acker and Fidler got me thinking about the difficulties of studying these systems historically. The IETF has done such a great job of publishing RFCs over its history. But I wonder how easy it is to get at the stories around these specifications, and their various versions?

Since I’m actively engaged in a project to think about the preservation of social media, I began thinking about how the metadata in a tweet has changed over the years. Projects like Hitch make it possible to look at how APIs like Twitter’s change over time. Documentation is sometimes available in the Internet Archive where it can be used to bring historical snapshots of documentation back to life. I thought it could be useful to create a bot that watches the Twitter sample stream and notices any new or changed metadata in the JSON for a Tweet. If you are are interested you can follow it at @tweetjson. 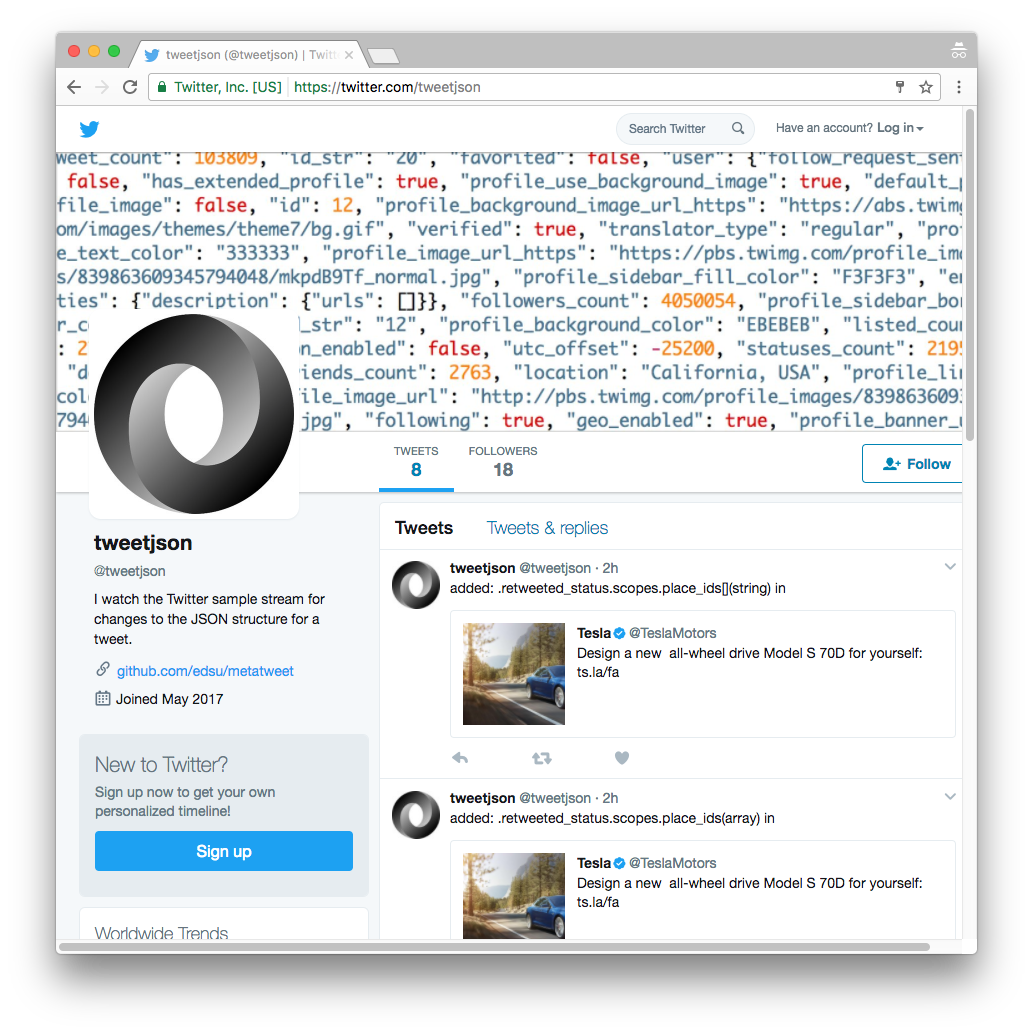 Here’s how it works. The bot watches the Twitter sample stream, and for each tweet it creates a blueprint of the data. It then compares this blueprint against a master blueprint, and announces any new or changed data properties on Twitter. The master blueprint is really just a snapshot of all the previous data fields the bot has seen, which is currently 1229 fields that you can see here.

The blueprint uses a jq like syntax to represent each path in the JSON data. It’s a bit more difficult to notice when fields are removed because not all tweets contain all fields. Just because a given field isn’t present in a tweet doesn’t mean it has been removed. I guess the bot could keep some kind of timestamp associated with each field and then if it grows really stale (like months?) it could assume that it has been removed? That was a bit more adventurous for the time I had available to test this idea out.

Anyway, I thought I’d write this up briefly here as a small example of how research can be generative for software projects. I hope that it can work the other way sometimes too.

Fidler, B., & Acker, A. (2016). Metadata, infrastructure, and computer-mediated communication in historical perspective. Journal of the Association for Information Science and Technology. Retrieved from http://onlinelibrary.wiley.com/doi/10.1002/asi.23660/abstract