TL;DR Deleted tweets in a #unitetheright dataset seem to largely be the result of Twitter proactively suspending accounts. Surprisingly, a number of previously identified deletes now appear to be available, which suggests users are temporarily taking their accounts private. Image and video URLs from protected, suspended and deleted accounts/tweets appear to still be available. The same appears to be true of Facebook.

Note: Data Artist Erin Gallagher provided lots of feedback and ideas for what follows in this post. Follow her on Medium to see more of her work, and details about this dataset shortly.

In my last post I jotted down some notes about how to identify deleted Twitter data using the technique of hydration. But, as I said near the end, calling these tweets deletes obscures what actually happened to the tweet. A delete implies that a user has decided to delete their tweet. Certainly this can happen, but the reality is a bit more complicated. Here are the scenarios I can think of (please get in touch if you can think of more):

I know, this is like an IRS form from hell right? So how could we check these things programmatically? Let’s take a look at them one by one.

With this byzantine logic in hand it’s possible to write a program to do automated lookups on the live web, with some caching to prevent looking up the same information more than once. It is a bit slow because I added a sleep to not go at twitter.com too hard. The script also identifies itself with a link to the program on GitHub in the User-Agent string. I added this program deletes.py to the utility scripts in the twarc repository.

So I ran deletes.py on the #unitetheright deletes I identified previously and here’s what it found:

I think it’s interesting to see that, at least with this dataset, the majority of the deletes were a result of Twitter proactively suspending users because of a tweet that had been retweeted a lot. Perhaps this is the result Twitter monitoring other users flagging the user’s tweets as abusive or harmful, or blocking the user entirely. I think it speaks well of Twitter’s attempts to try to make their platform a more healthy environment. But of course we don’t know how many tweets ought to have been suspended, so we’re only seeing part of the story–the content that Twitter actually made efforts to address. But they appear to be trying, which is good to see.

Another stat that struck me as odd was the number of tweets that were actually available on the web (TWEET_OK). These are tweets that appeared to be unavailable three days ago when I hydrated my dataset. So in the past three days 980 tweets that appeared to be unavailable have reappeared. Since there’s no trash can on Twitter (you can’t undelete a tweet) that means that the creators of these tweets must have protected their account, and then flipped it back to public. I guess it’s also possible that Twitter suspended them, and then reversed their action. I’ve heard from other people who will protect their account when a tweet goes viral to protect themselves from abuse and unwanted attention, and then turn it back to public again when the storm passes. I think this could be evidence of that happening.

One unexpected thing that I noticed in the process of digging through the results is that even after an account has been suspended it appears that media URLs associated with their tweets still resolve. For example the polNewsForever account was suspended but their profile image still resolves. In fact videos and images that polNewsForever have posted also still seem to resolve. The same is true of actual deletes. I’m not going to reference the images and videos here because they were suspended for a reason. So you will need to take my word for it…or run an experiment yourself…

FWIW, a quick test on Facebook shows that it works the same way. I created a public post with an image, copied the URL for the image, deleted the post, and the image URL still worked. Maybe the content expires in their CDNs at some point? It would be weird if it just lived their forever like a dead neuron. I guess this highlights why it’s important to limit the distribution of the JSON data that contain these URLs.

Since the avatar URLs are still available it’s possible to go through the suspended accounts and look at their avatar images. Here’s what I found: 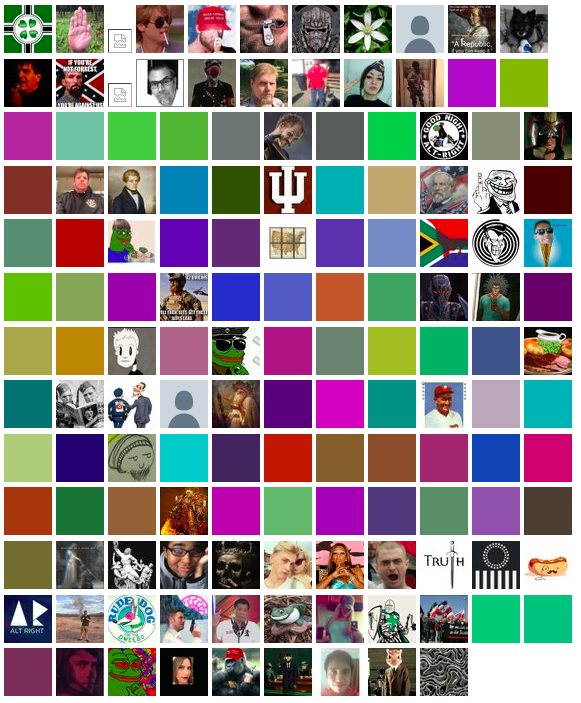 Notice the pattern? They aren’t eggheads, but pretty close. Another interesting thing to note is that 52% of the suspended accounts were created August 11, 2017 or after (the date of the march). So a significant amount of the suspensions look like Twitter trying to curb traffic created by bots.