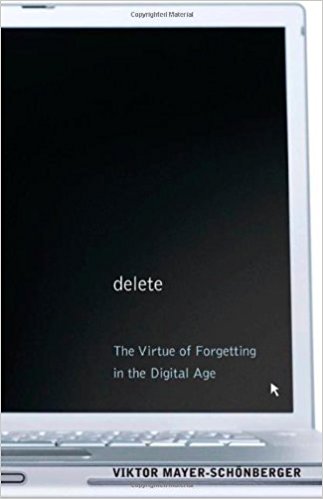 I recently finished reading Delete by Viktor Mayer-Schönberger and thought I would jot down some brief notes for my future self, since it is a significant piece of work for my interests in web archiving. If you are interested in memory and information and communication technologies (ICT) then this book is a must read. Mayer-Schönberger is a professor at the Oxford Internet Institute where he has focused on issues at the intersection of Internet studies and governance. Delete is a particularly good tonic for the widespread idea that electronic records are somehow fleeting, impermanent artifacts–a topic that Kirschenbaum (2008) explored so thoroughly a year earlier from a materialist perspective.

Delete functions largely in two modes. The first (and primary) is to give an overview of how our ideas of permanence have shifted with the wide availability of computer storage and the Internet. The focus isn’t so much on these technologies themselves, but on the impact that storage capabilities and wide distribution has had on privacy and more generally on our ability to think. Mayer-Schönberger observes that for much of human history remembering has been difficult and has required concerted effort (think archival work here). The default was to forget information. But today’s information technologies allow the default to be set to remember, and it now requires effort to forget.

Examining the potential impacts upon cognition and our ability to think are where this book shines brightest. If the default is set to remember how does this shape public discourse? How will ever present and unlimited storage with a surveillance culture work to cement self-censorship that will suppress free expression and identity formation? The book contends that ICT allow Bentham’s Panopticon to be extended not only in space, but also in time, recalling Orwell’s popular quote, as used by (Samuels, 1986):

It is easy to see this mechanism at work in large social media companies like Google and Facebook, where efforts to delete our data can get interpreted instead as deactivate, which simply renders the content inaccessible to those outside the corporate walls. The data that these companies collect is core to their business, and extremely valuable. They often aren’t deleting it, even when we tell them to, and are incentivized not to. What’s more the parties that the data has been sold to, or otherwise shared with, probably aren’t deleting it either.

While it’s true that computer storage has greatly enabled the storage of information it has also, at the same time, accelerated our ability to generate information. I feel like Mayer-Schönberger could have spent more time addressing this side of the equation. There are huge costs associated with remembering at the scales that Google, Facebook and other companies are working at. There are also large costs associated with preserving information for the long term (Rosenthal et al., 2012). Are large technology companies invested in saving data for the long term? Or are they more oriented to extracting market value out of our personal data while it is valuable as an predictive economic indicator. Examples like Google’s preservation of Usenet are in short supply. It is important to think about now only how things are being remembered, but who is doing the remembering. If it does become valuable to remember for the long term then we face a situation when only very large organizations are able to do it, which

As others gain access to our information (especially when we do not approve or even know of it), we lose power and control. Because of the accessibility and durability of digital memory, information power not only shifts from the individual to some known transactional party, but to unknown others as well. This solidifies and deepens existing power differentials between the information rich and the information poor, and may even deny the latter their own conception of the past.

This future where access to our past could be increasingly denied is a disturbing thought indeed. It also foregrounds the importance of memory work as a source of power and vehicle for social justice (Jimerson, 2009, p. @Punzalan:2016).

The second mode that Delete engages in is exploring possible responses to the problem of deletion and memory in ICT. One of the more useful contributions that Delete offers is a framework for thinking about the range of responses:

This framework largely operates to carve out the area of cognition as a new territory for experimentation. Delete does do a nice job of talking about privacy laws and digital rights management (DRM) systems. In particular Halderman, Waters, & Felten (2004) is cited as an example of example of work on protocols for informed consent that could hold promise. I think we have seen these play out more recently in affordances of social media where for example in Facebook you have the ability to control whether other people can tag you in photos. It is an area we are looking to more fully develop in the Documenting the Now project.

But in general Meyer-Schönberger asserts that DRM and privacy rights tends to be oriented around binary operations (rights, no rights) and when rights are obtained the party can do whatever they want with the content. Power differentials are also at work, where large powerful companies obtain rights from the weaker individuals, who ultimately have little bargaining power. Even in countries that have privacy laws around personal data, there has been very little exercise of them. This was back in 2009, and it would be interesting to know if it’s still the case.

At any rate, all of these solutions are examined but ultimately put aside for some failing or another in order to promote the proposed solution which the book has been leading up to: reintroducing forgetting. Specifically the last few chapters make the case for adding controls into applications that let users control how long content lives. You do get the feeling that this is the horse that the book has been betting on since the beginning, and that other options have been summarily dispatched to leave it as the only contender. But Meyer-Schönberger’s analysis of the other options is really quite convincing, and is really meant to paint a full picture, not to invalidate the other approaches.

The idea of an HCI approach to forgetting must have been quite novel at the time, and I’d argue that it still is. We now see the ability to delete your account from social media platforms like Facebook for example. Snapchat has popularized the idea of ephemerality of personal data, which has been picked up by Instagram in their stories feature, where content expires after 24 hours. Instagram also offers an archive function which makes previous posts only available to you and not to the public or those who follow you. It is interesting to see these affordances being built into tools, and as far as I know not much research has been done into why and how users are choosing to use them. Also, it would be interesting to see how understandings of the deletion match up to reality. If you have run across research (or are doing it yourself) that has I’d love to hear from you.

The idea of expiration dates outlined in Delete is expressed as a negotiation between parties that is reminiscent gift agreement in archives. This makes me wonder if it could be useful to draw on the research literature around privacy in archives (MacNeil, 1992) and the impacts of digitization on archival preservation (Iacovino & Todd, 2007).

Which brings me to my last point, and one of the main drawbacks of Delete. Unfortunately there is very little mention of the role of libraries and archives throughout the book as memory institutions (p. 190). Really the only mention of archives and libraries comes near the end when discussing the potential negative impacts of expiration dates:

… expiration dates may be accused of impeding the work, and even calling into question the very existence, of archives and libraries. This belief is unfounded. Expiration dates let individuals decide how long they want information to be remembered. But societies have the power to override such individual decisions if necessary–for example, by mandating information retention, and by maintaining libraries, archives, and others special institutions to preserve the information about a particularly important event of the past. Nothing of this proposal would alter or change that–except perhaps the need to make such information retention exceptions explicit and transparent.

The book would have benefited from a look at record management processes, and processes of appraisal which work to select material for long term preservation and access. In addition to expiration there is the related idea of content that is embargoed for access until a certain time has passed. By what mechanisms would society override an expiration date? And what of situations where powerful institutions are able to override the archive (George, 2013)?

One interesting idea that Delete mentions is the idea of digital versions of “rusting” that mimics partial as well as gradual forgetting.

We could invision, for example, that older information would take longer to be retrieved from digital memory, much like how our brain sometimes requires extra time to retrieve events from the distant past. Or digital memory might require more query information to retrieve older information, mimicking how our brain sometimes needs additional stimuli for us to remember. A piece of digital information–say a document–could also become partly obfuscated and erased over time, and not in one fell swoop, thus resembling more closely human forgetting and partial recall.

This discussion of “rusting” reminds me of the ways in which cards can appear to age and are then archived in Trello or pictures are archived in Instagram. It also recalls the ways in which tape archive systems function to keep frequently used data in nearline storage which is a state in between online (readily accessible) and archived (taking a long time to access). Amazon’s Glacier operates in a similar way to save the cost of keeping data by pushing it offline into an archive.

This rusting could be methodically introduced into systems, for example it’s interesting to consider if the Library of Congress Twitter Archive were to be made available only on site (not on the Internet) and queries took up to 24 hours to complete. While these limitations could be criticized as an access bug, they could also serve as a rusting feature that operates as a limit or bounding function for memory. I think it’s possible to also look at the perceived clunkiness and imperfection of accessing the Internet Archive’s Wayback Machine by URL, and the current lack of search, as a feature that allows this very special archive to exist. A total-recall web archive (full coverage with search) could present serious cultural and cognitive challenges to our concept of memory, and the role of technology in mediating memories.

Delete is ultimately a call to do more research into the impacts of ICT on memory, and explore new affordances for memory in our tools and pratices.

We do not know well enough yet how human forgetting and recall work to replicate them with sufficient precision in digital code. But that should not keep us from trying. Perhaps it is possible to craft an expiration date mechanism that is a bit closer to how human memory and forgetting work, in return for only a modicum of added complexity.

I’m about to embark on more reading about memory and technologies, so if you have recommendations please let me know! As an aside I’ve started I’ve started tagging stuff I run across on the web with the tag delete.

PS. Delete also teaches the value of a succinct and evocative title for your work. It was fun using the book title interchangeably with the author’s name, as if the book had somehow become a persona or character, and take on a life of its own.

George, C. (2013). Archives beyond the pale: Negotiating legal and ethical entanglements after the belfast project. The American Archivist, 76(1), 47–67.