Because of my work in the iSchool and at MITH, and the influence of various people in both, I’m getting increasingly interested in looking at social media through the lens of software and platform studies.

When you think about it, it’s not hard to conceive of the application programming interface or API as a contract or blueprint for what a social media platform allows and does not allow. If you want to get information into or out of a platform and there’s no API endpoint for it, you can’t do it…at least not easily without scraping or other hijinks. So the API is a material expression of a platform’s politics, its governance and business models.

What’s really quite interesting is how these APIs are situated in time as documents. In some ways they are similar to the Terms of Service documents. But since I’m a software developer and not a lawyer, the API documentation feels more explicit or actionable. Either the API call works, or it doesn’t. If you want to test whether it works you try it out. The API docs clearly define the limits of what is possible with the social media platform. This is unlike the ToS, which one can be unintentionally oblivious of, or choose to blithely disregard or even transgress.

But as most people involved in information technology know, there can often be significant gaps between our technical documentation and how things actually work. Sometimes this is the result of drift: the code changes but the documentation does not. Sometimes I think it’s also because the behavior of a complex system isn’t understood well enough to be able to make it understandable in prose.

If this sort of thing interests you too you might be interested in a little service called API Changelog. They monitor the documentation of over 100 different APIs (Twitter, Facebook, Slack, GitHub, Weibo, etc) and email you little alerts when there have been changes. Because of some work I’m involved in I’m particularly interested in the Twitter API, so I’ve been watching the changes for a few months now.

For example consider this change that arrived in my inbox this morning. 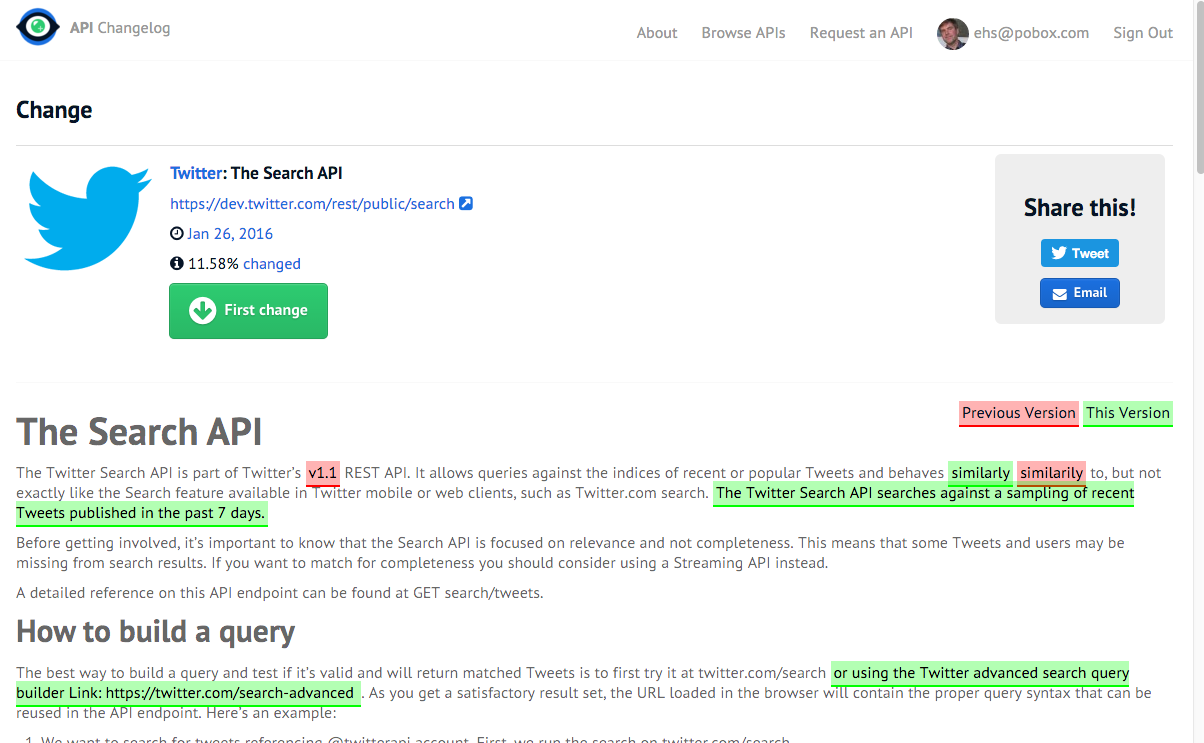 There are lots of little changes highlighted here in a diff style format. One thing that popped out at me was the addition of this phrase:

The Twitter Search API searches against a sampling of recent Tweets published in the past 7 days.

Like most people who work with the Twitter API I’ve known about the 7 day limit for some time. What popped out at me (and what I emphasized in the quote) was the use of the word sampling … which indicated to me that not all tweets in that time period are being searched. Of course this raises questions about what sort of sample is being employed, and recalls research into the bias present in Twitter’s search and streaming APIs (González-Bailón, Wang, Rivero, Borge-Holthoefer, & Moreno, 2014), (Driscoll & Walker, 2014).

Now this might sound academic, but really it’s not, right? I’m actually kind of curious how API ChangeLog itself works. It might be a straight up diff, but there is some smarts to what they are doing since it seems sensitive to the textual content but not the styling of the documentation. It’s interesting how a service for developers that use the APIs and businesses that provide APIs can have a mirror purpose for those that are studying APIs.