He starts off by recalling the previous discussion of Marx, particularly his description of work in Das Kapital, where work is broken up into a set of interdependent components:

The identity of the worker is a net effect of this process. Vygotsky and other activity theorists took these rough categories and refined them. Vygotsky in particular focused attention on mediation, or how we as humans typically interact with our environments using cultural artifacts (things designed by people) and that language itself was an example of such an artifact. These artifacts transform the person using them, and the environment: workers are transformed by their tools.

Instead of focusing on individual behavior, activity theorists often examine how actions are materially situated at various levels: actions, activities and operations which are a function of thinking about the collective effort involved. This idea was introduced by Leont’ev (1978). Kuutti (1996) is cited a few times, which is interesting because Kuutti & Bannon (2014) is how I found out about Nicolini in the first place (small world). To illustrate the various levels Leont’ev has an example of using the gears in a car with manual transmission, and how a person starts out performing the individual actions of shifting gears as they learn, but eventually they become automatic operations that are performed without much thinking during other activities such speeding up, stopping, going up hills, etc. The operations can also be dismantled and reassembled and recomposed to create new actions. I’m reminded of push starting my parent’s VW Bug when the battery was dead. The example of manual transmission is particularly poignant because of the prevalence of automatic cars today, where those shifting actions have been subsumed or embodied in the automatic transmission. The actions can no longer be decomposed, at least not by most of us non-mechanics. It makes me wonder briefly about the power dynamics are embodied in that change.

It wasn’t until Engeström (1987) that the focus came explicitly to bear on the social. Yrjö Engeström (who is referenced and linked in Wikipedia but there is not an article for him yet) is credited for starting the influential Scandinavian activity theory strand of work, and helping bring it to the West. The connection to Scandinavia makes me think about participatory design which came from that region, and what connections there are between it and activity theory. Also action research seems similarly inflected, but perhaps it’s more of a western rebranding? At any rate Engeström got people thinking about an activity system which Nicolini describes as a “collective, systemic, object-oriented formation”, which is summarized with this diagram: 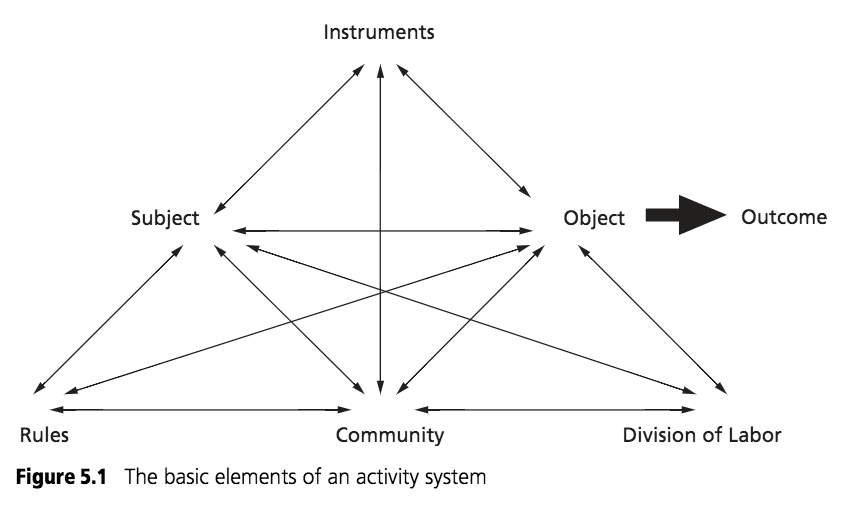 This makes me wonder if there might be something in this conceptual diagram from Engeström for me to use in analyzing my interviews with web archivists. It’s kind of strange to run across this idea of object-oriented again outside of the computer science context. I can’t help but wonder how much cross-talk there was between psychology/sociology and computer science. The phrase is also being deployed in humanistic circles with the focus on object oriented ontology, which is a philosophy of decentering the human. It’s kind of ironic given how object-oriented programming has fallen out of favor a bit in software development, with a resurgence of interest in functional programming. But functions can be objects, but then there is the post-functionalism move, so…but I digress, completely.

This is where Cultural and Historical Activity Theory (CHAT) come in, which is concerned with the ways in which objects are both socially and objectively constructed. It seems like an attempt at a middle path between social sciences and the physical sciences. This focus on the material and where it intersects with the social is something I really like about this line of thought coming from Marx. It’s interesting that Nicolini uses the phrase “bite back” here to talk about how objects can affect us as well. I seem to remember running across this idea in some of Ian Bogost’s work but I can’t place it right now. It’s an interesting phrase that might be fun to follow in the literature. Anyway CHAT is a relatively recent formulation (relative to activity theory) and credited to Miettinen & Virkkunen (2005). It seems like a useful thing to follow up on in the context of my Web archiving study because I do need a way to talk about the material of the archive, the archival system, the Web and the people working with it (archivists, researchers, etc)–and fitting the analysis into existing work will be helpful.

CHAT folks will often look at at least two activity systems, to show how interactions between activities embed social practices: Knotworking. Engeström, Engeström, & Vähäaho (1999) looks like an important paper to read to follow up on this idea.

Activity systems are, in fact, by definition internally fragmented and inconsistent. The tensions and conflicts emerging from such contradictions constitute the origin and the source of energy for the continuous change and expansion of activity systems and their components. (p. 114)

I’m wondering if there is a connection between the idea of Broken-ness, fragmentation and broken world thinking & repair. The idea of Knotworking (Engeström et al., 1999) specifically recalls Jackson, Gillespie, & Payette (2014). I like the idea of zooming on sites of conflict or contradiction as a way of locating activities and practices, and seeing them as integral features, and locations for dialectical processes and resolution (Marx). CHAT also stresses that these sites are also useful as spaces for intervention and redesign. It is suggested that it might be necessary to engage at this level to truly understand the activity. [Antonio Gramsci] is cited here for his idea of organic intellectuals. Engestrom (2000) and Engeström (2001) both look like they could be good things to read to follow up on this idea about interventions, particularly for its focus on ethnographic methods, the necessity to generate thick description. Also there is a connection back to American Pragmatism that seems like an important connection, at least for me (Miettinen, 2006).

It’s a bit early to say, but after reading this chapter about CHAT I feel like I’ve found the conceptual tool I was missing for analyzing my interview transcripts. It also situates my work on DocNow by positioning that work as an intervention for understanding, which is extremely helpful. Nicolini’s critique of a strong version of CHAT, one that treats the activity system itself into a thing itself seems very apt here. Also, some Marxists have criticized CHAT for its conservative use of Marx: fixing small local problems, without looking at the larger picture.