As we have seen in previous chapters, different theories of practice grant very different roles to language and discourse. For example,while Bourdieu almost ignores the role of linguistic matters (see my criticisms in Chapter 3), Schatzki describes practices as nexuses of‘sayings and doings’,warning that no priority should be granted to either of the terms (see Chapter 7). Thirdly, and most importantly, the study of discourse can offer some fundamental insights into the general understanding of practice. This is because, over the last five decades, a number of research programmes have developed the idea that discourse is,first and foremost, a form of action, a way of making things happen in the world, and not a mere way of representing it.From this perspective, language is seen as a discursive practice, a form of social and situated action. (p. 189)

He cites (Gee:2011?) to distinguish lowercase discourse from uppercase Discourse. discourse is taken as the mundane analysis of everyday language in order to accomplish some activity. Discourse on the other hand is concerned with the way linguistic and non-linguistic systems are integrated, and how this can make notions of identity, knowledge and power legible. Nicolini treats this more like a continuum with the local and the global at different poles. He takes a look at three different approaches to discourse analysis, which are relevant to practice theory.

CA grew out of ethno-methodology, but has established itself as a separate study to some extent. It makes the following assumptions:

It takes a very disciplined view of discourse and attempts to keep second order theoretical considerations such as notions of power, politics, ideology at a distance. There are some techniques or strategies such as the turn-taking machine which provides a way of examining transcripts to look for patterns in speech exchange.

CDA was largely established by Michel Foucault whose approach to discourse shifted from an archaeological approach to on focused on genealogy (Davidson, 1986). One feature of CDA is the idea of discursive formations or sets of rules that determine what can and cannot be said as well a, what is allowed and not allowed to be said. These formations are situated in relation to other formats, which take as a whole form an order of discourse. Foucault’s view of discourse can be summarized as:

Rather than looking at repetition as with a turn-taking-machine Foucault is interested in looking at why and how practices establish and maintain regularities across time and space. Fairclough (2013) could provide a jumping off point to learn more about the application of CDA. Intertextuality or the ways in which texts are interconnected is an important concept in CDA. It focuses not only on content and structure, but on the material chains and stabilized networks along which texts move, or do not move along. He uses this diagram from Fairclough (1992), which might also be worth looking at: 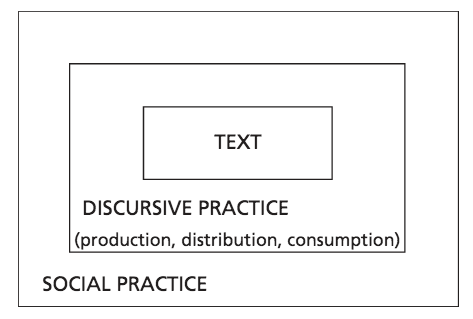 This focus on the text or documents as they are situated in social practices seems like it could be a useful way of looking at the construction of web archives. I guess Caswell (2016) could be a useful touchstone here if I continue down this particular road. It also looks like Engeström, who I’ve encountered earlier in Chapter 5, had some criticisms of the local/global dichotomy that CDA sets up. I’ve been meaning to follow up on some of his work, so maybe his connection to this idea of intertextuality is another vote to head in that direction.

As he said previously, Mediated Discourse Analysis charts a middle path between the linguistic focus of CA and the politically minded CDA by focusing on practice and social action. Nicolini cites Scollon (2002) when outlining the 5 aspects to MDA, which draw heavily from practice theory:

MDA was pioneered by Ron Scollon near the end of his life and, according to Nicolini, much work remains in establishing it as a theory/model for actual work. In particular Nicolini thinks MDA could be brought into conversation with Actor Network Theory (Latour, 2005; Law, 2009). Scollon worked at Georgetown University, which makes me wonder if his papers are there. He was a linguist who worked closely with his wife Suzanne Wong Scollon on intercultural communication and discourse analysis. It’s interesting that he would end his career as a linguist shifting attention to actions and practices in this way.