For the next few weeks I’m helping out in Matt Kirschenbaum’s Critical Topics in Digital Studies where we will be taking a look at network analysis in the humanities. The plan is to provide a gentle introduction to the use of network analysis, aka graphs, in the digital humanities, while providing the students with some hands on experience using some tools.

Thanks to a conversation with Miriam Posner, Thomas Padilla and Scott Weingart a few weeks ago I got some ideas for how this could work. Specifically Miriam’s idea of having the students assemble edge lists for networks that are relevant to them in Google Sheets, and then using Google Fusion tables to do some basic visualization followed by some more analysis and tuning of the visualization with Cytoscape. Miriam’s Cytoscape Tutorials are so lucid and useful I’m planning to just use them directly. I really appreciate that she took the time to make them available for use by other people.

So I wanted to create my own little demonstration dataset similar to how Miriam used films to learn my way around Fusion Tables and Cytoscape. Over a year ago MITH made its Research Explorer available, which is a small app that allows people to browse research projects from the last 10 years by sponsor, topic and time. One nice side effect of putting the JavaScript application together is that the project information that has been curated in Wordpress is also available as a single file of JSON.

So without too much work it’s possible to download that JSON file and then turn it into an edge list CSV file where column 1 is a project and column 2 is a person who was involved in the project. Then you can load it into Google Fusion Tables and with two clicks you are looking at a graph of that data:

It’s a little bit interesting, and it’s nice you can manipulate the graph … but it’s kind of a mess really. One thing that Miriam suggested doing is taking the two-mode graph (there are two types of nodes here: people and projects) and projecting it as two one-mode graphs: graph 1 would be of people and graph 2 would be of projects. The people graph would be people who were associated because they worked together on the same project. And the graph of projects would have projects linked together because similar people worked on them. Here’s what they look like:

As you can see they are much more interesting. The people one in particular shows MITH’s Director Neil Fraistat at the center. Also our designer Kirsten Keister who has been in MITH for a while, has worked with many different people over the years.

Miriam had the students use R to do this projection, using a small helper function that Matt Lincoln wrote. But I’ve been meaning to learn more about Python’s igraph so I took it as opportunity to learn how to do it. It’s not as elegant’s as Matt’s code, but it works. I think I may turn it into a little microservice so the students can just use the browser to do the transformation.

The next step for the class is going to show how to take the same edge list and load it into Cytoscape where the graph can be manipulated a bit more. Specifically it’s possible to use the number of times people collaborated together as edge weights, and then to use that weight to change the appearance of the edge. In this example I used the weight to make the edge thicker: 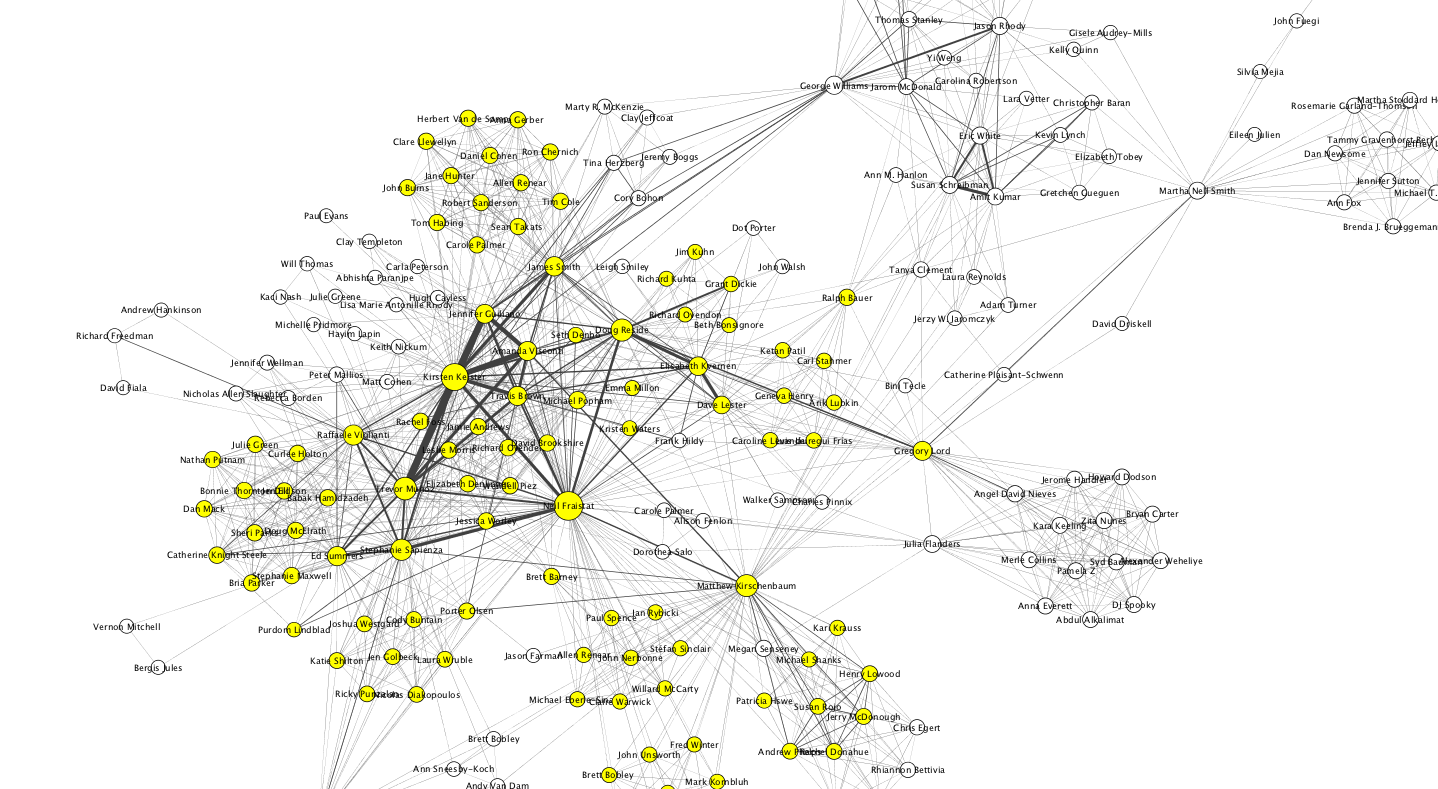 It’s not really very legible here, but in Cytoscape it’s easy to zoom in and see that there was a cohort of people who did lots of work together: Trevor, Kirsten, Jen, Amanda, Travis and Neil. You can also see bridging people like Ben Schneiderman who brought in people from outside of MITH’s usual collaborators. If you are interested and have Cytoscape you can find the cys file here.