If you’ve wandered across this blog before you’ll have gathered that over the past few years I’ve become interested in studying how web archives are assembled. By web archives I generally mean collections of web content, that are often (but not necessarily) also on the web. Web Archives are often thought to have a particular architectural shape, e.g. as a Wayback Machine, running atop a corpus of WARC data, that has been assembled with Heritrix – or some variation on that theme (e.g. Webrecorder). But I’d like to suggest that this is not the only shape that web archives come in, and that artificially limiting our assessment of web archives in this way shortchanges us from recognizing the full spectrum of archiving that is being practiced on the web today.

For example while indexing the web Google routinely collect content from the web which sometimes leaks out in the form of fleeting citations to the Google Cache. Not all archives keep everything forever (whatever forever means). So the fact that Google Cache isn’t permanent doesn’t necessarily mean it’s not archival. I think it’s actually kind of useful to look at Google Cache as one aspect of an archival process at work. Google has built particular distributed workflows for collecting content from the web, to use in their indexing, search, advertising and other business operations. They aren’t using Heretrix and Wayback Machine–I guess there’s the possibility of WARC being used somewhere in their infrastructure, but I doubt it (if you know otherwisee it would be great to hear from you.

For the last 6 months I’ve been collecting tweets that reference particular web archives including Google’s Cache to see how web archives are shared in social media. The thought being that this data could provide some insight into how archival representations are being used on the web (props to Jess Ogden for the idea). So far it has found 631,811 tweets, only 10,053 of which point at Google’s Cache. Here’s an example of one such tweet: 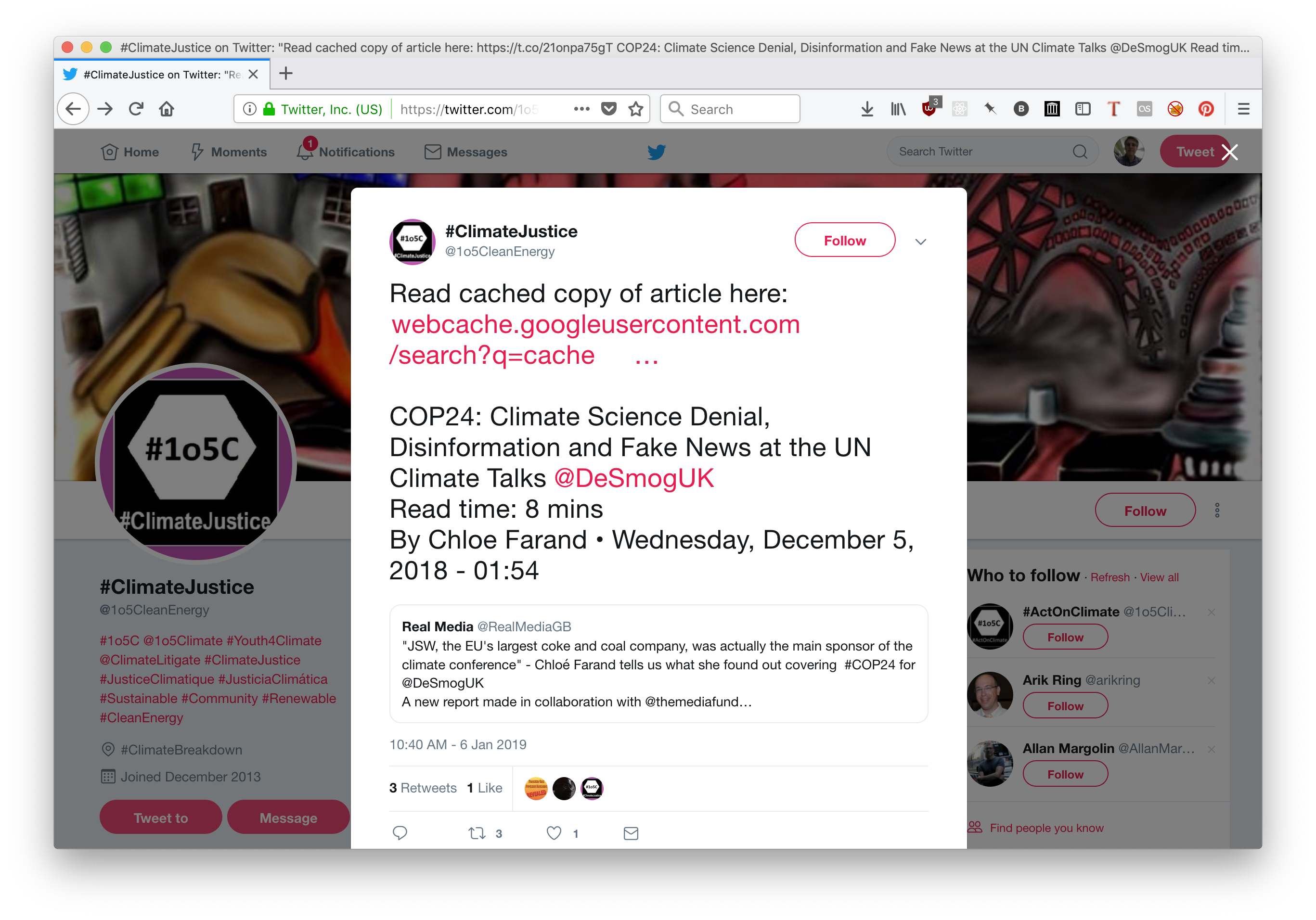 As another archival shape consider the social media site Pinterest, which allows users to build their own collections of images from the web. Users add images as pins to boards where they can be described, put into different sections and then shared and reshared with others both inside and outside of the Pinterest platform. Pinterest provide a browser extension that lets you hover over any image you see on the web and easily add it to one of your boards. This pinning operation doesn’t capture the entire page, but just the one image that you have selected. Pinterest does attempt to extract the title and description of the image, and they also remember where the image has from in terms of its original URL if you want to go back to see where this image came from. In this example below I’ve added a portrait of Michelle Obama from the National Portrait Gallery to a Pinterest board. You can see near the bottom of the third screen that the link to the National Portrait Gallery is preserveed. I think this simple measure of provenance is what gives Pinterest an archival shape. 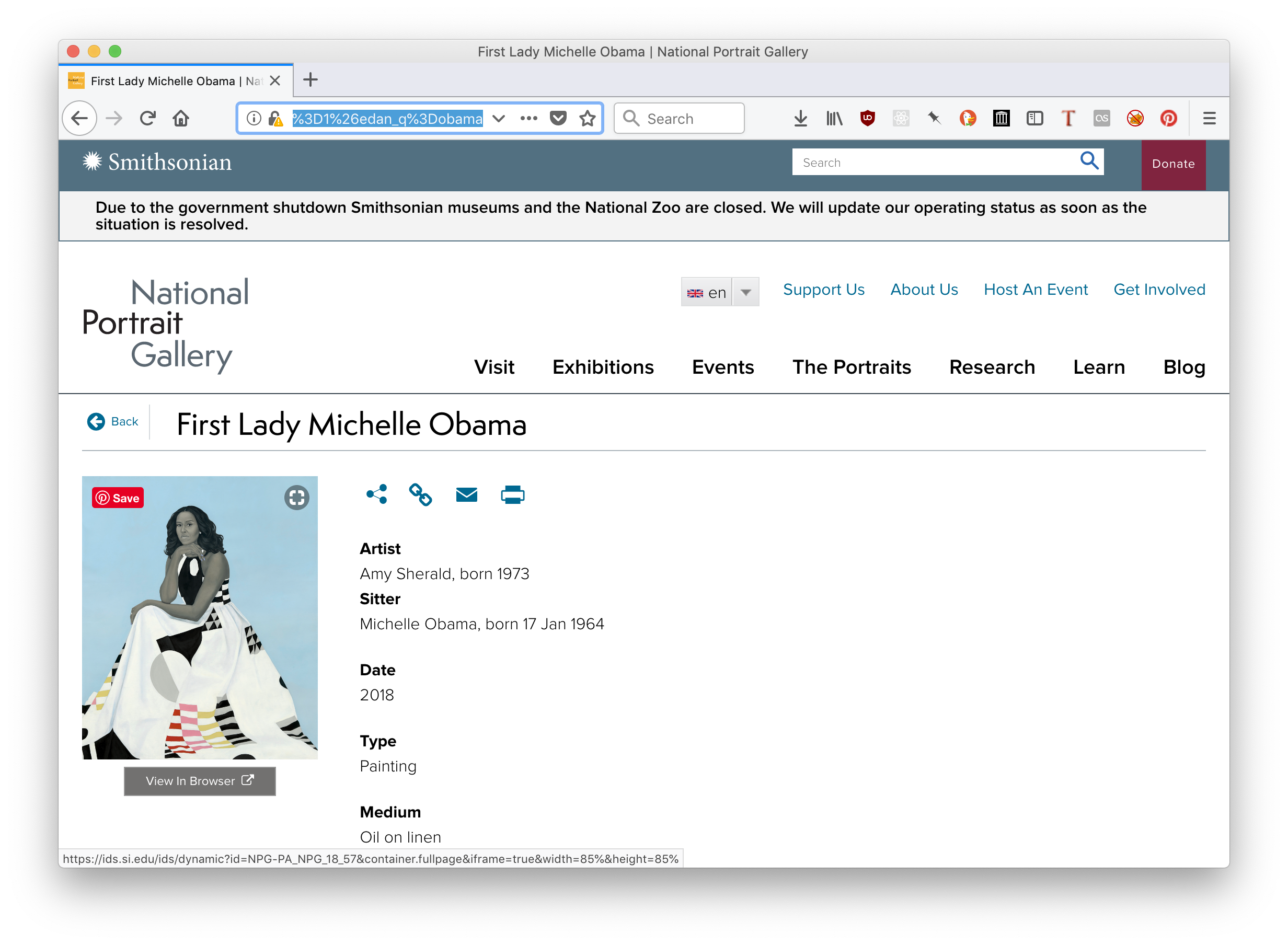 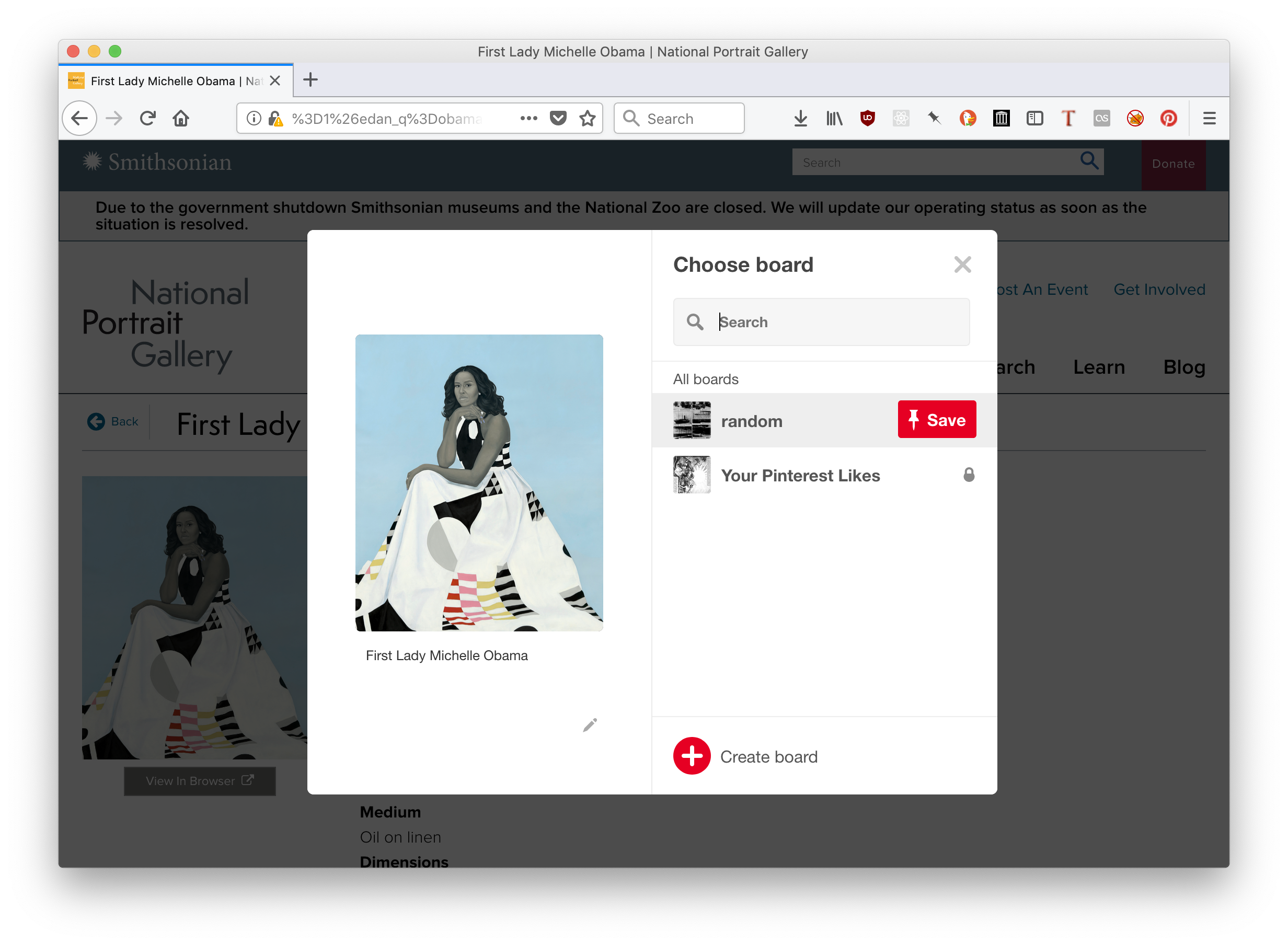 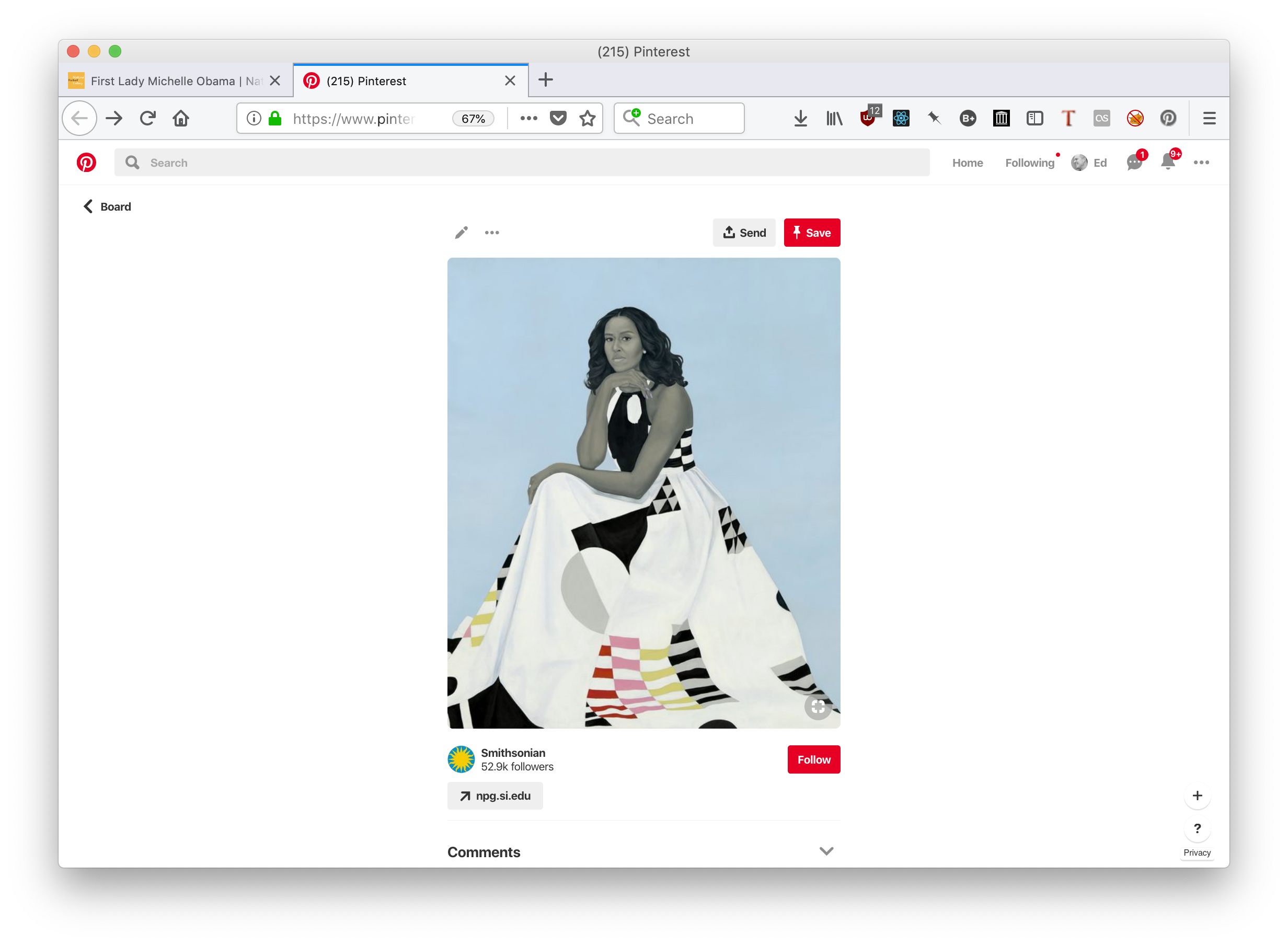 The architecture of the Internet Archive has done a lot to promulgate the idea that web archives have a particular architectural shape. I think part of the reason for this is because of the astounding job IA does in providing access to both the portions of the web that they have archived, as well as the descriptive metadata for their collections. They make the data they have collected from the web available for replay through their Wayback machine, and also through a variety of REST APIs as well as BitTorrent.

This data is gold mine for people wanting to view the web over time, and also for researchers studying the processes by which web archives are built. But it’s important to remember that IA is just one particular type of web archive, and that other archival representations of the web exist. As Ogden, Halford, & Carr (2017) hasve pointed out, it’s important to understand not only the architectural formations of web archives, but also the forms of labor that go into producing them.

One of the interesting aspects to the way that Internet Archive decide what to collect from the web is their collaboration with the ArchiveTeam. ArchiveTeam is a loose collective of volunteers that work to collect content from sites that are going offline. For example they are working right now to collect Tumblr as it is removing large portions of its content so they can get their iOS app back in the iOS App Store. ArchiveTeam build crawling/archiving bots using their own infrastructure and transfer the collected WARC data to the InternetArchive.

Since this data is deposited at the Internet Archive you can use the Internet Archive’s API to examine how the data has grown over time. The data itself is not available to the general public outside of the Wayback Machine. But any member of the public is able to view the metadata for each item, where an item is a set of WARC data delivered from the ArchiveTeam to the Internet Archive. I’ve documented this process in a Jupyter notebook if you are interested in the details, but here is a resulting graph of the ingest rate per month:

For now let’s set aside the ethical questions raised by Tumblr’s decision to purge their site, and ArchiveTeam’s response to unilaterally archive the at risk Tumblr content for perpetuity without with the content creator’s consent. These are important questions, and are a big part of what I’m concerned with in my own research, but they aren’t really the focus of this post. Instead what I wanted to emphasize is that the different shapes of web archives extend outside of their technical architectures and into the forms of labor that they make possible, or are made possible by, and that the assemblages of technology. We can think about this as usability, collaboration, or crowdsourcing, but ultimately these amount to different types of labor.

Allow me to close this meandering blog post by connecting the discussion of archival shapes back to archives. In his genealogical exploration of the development of the Records Continuum model Frank Upward suggests that the idea of the records continuum sits atop the foundation Australian recordkeeping established by Ian Maclean (Upward, 1994 ; Maclean, 1959). According to Upward, Maclean broke with the (at the time) established Jenkinsonian idea that archival records accrue as part of natural processes. For Jenkinson the archivist is an impartial actor who merely cares for the records that have been generated as part of the functioning of some administrative body. Upward saw that Maclean returned to an older conception of archival records found in the so called Dutch Manual (Muller:2003?), where archival records are created or produced. Archival records aren’t simply collected but created, and made to be archival. In this view the archivist plays a significant role in that creative process, and is not a neutral, unbiased participant.

I mention this here just as a personal place holder for a larger discussion. Sometimes web resources are published in such a way that reflects archival thinking. For example Wikipedia’s publishing of the version history of an article. Or when a blog post is published with a permalink that makes it easier to cite, and move about on the web. But sometimes (most of the time) web resources are published without thinking about the archive at all. But these resources are made archival by placing them into an archival context, such as Google Cache or Pinterest mentioned above. The mechanics of this placement (which let’s be honest is really a type of creation) are significant to the study of archival shapes on the web.