Since the Coronavirus stay-at-home order went into effect we’ve allowed Maeve to play outside in our yard with one friend, a neighbor named Gracyn. We’ve been careful not to allow Gracyn into our house, and sometimes Maeve will go over to Gracyn’s house to play in her yard. I guess this is breaking the rules, but they have only seen each other, and our families have stayed in touch through messaging to let each other know if anyone has felt even the least bit sick. Luckily so far we’ve all been healthy.

So Maeve and Gracyn have seen each other pretty much every day for the past month and a half, when the weather has been nice. There have even been some drizzly days when they played outside in the rain. As Kesa and I have been doing work they’ve played together, requiring very little attention from us, apart from the occasional snack or drink of water.

Yesterday I found this piece of paper with Maeve’s handwriting on it. When I asked her about it she said that her and Gracyn wrote it together. I’ve included a picture below, but here is a transcription. At first I added some periods in to try to massage it into sentences, but that disturbed the flow of the words. So I left it how she wrote it, after adjusting some of her 8 year old spelling. 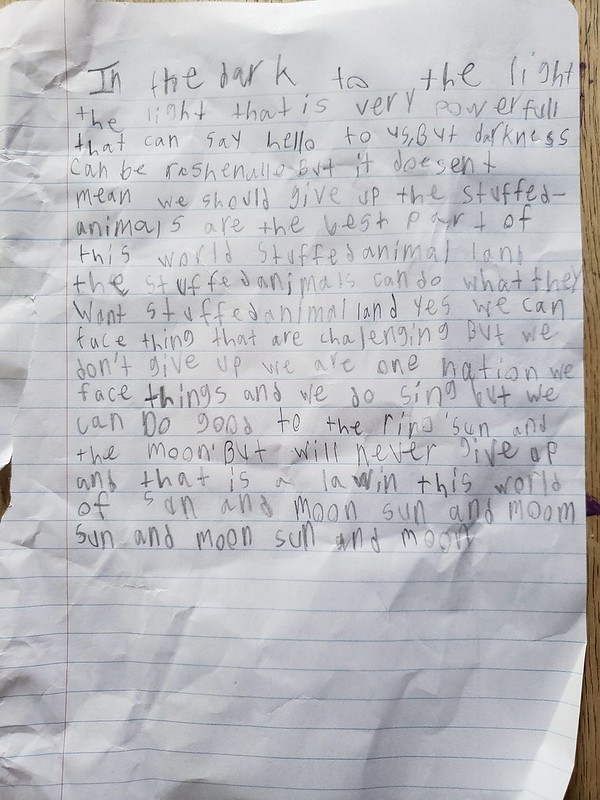 I feel very, very lucky that we have a small yard for them to play in, and that we have a little area for them to ride their bikes. Several people have said to me that it must be hard looking after children during this time, with all the changes to schooling, and the multiple Zoom calls going on in our small house. But honestly it feels like the children are looking after us.