These are some rough notes for a virtual event that University College London Department of Information Studies hosted on Participatory Archiving and Digital Memory. I woke up at 3:30AM to attend, so I apologize in advance for the sketchiness of what follows 😴 ☕ ☕ ☕

Gillian Oliver got things started by focusing attention on the importance of “data cultures”. As an example of data cultures she pointed to how the idea of data privacy can be seen through notions of collectivism or the continuum between I and Us. In some of her research she has looked at how shared use of cell phone technology in Bangladesh happens despite the fact that the devices themselves are designed for individual use by (Ayn Rand inspired) Silicon Valley. She cited two of her works that are available for more information on data cultures:

She emphasized the first because it is open access, and also authored by Frank Upward who just died last week :(

There was a brief discussion afterwards about the differences between talking about data, information and records. It seems to me this kind of tension is pretty important to address for archival research programs. A participant suggested that record keeping perspectives are a form of expertise, and that all academic disciplines have their forms of expertise. I wondered about the connection between “data cultures” and fields like critical data studies.

Alexandra Eveleigh is currently working at the Wellcome Trust and has been involved at the intersection between crowdsourcing/participation and archives for about 10 years. She gave an overview of the idea of participation in archives, and how the social web, or web 2.0 perspectives/technologies impacted archives. Terms like “crowdsourcing”, “archives 2.0”, “participatory archives” are slippery. Much work has ended up being facilitated in part through social media. Eveleigh put this XKCD cartoon alongside her timeline to emphasize how much early thinking about participation has been understood through our evolving conceptions about social media platforms, that are themselves fragmented territories. 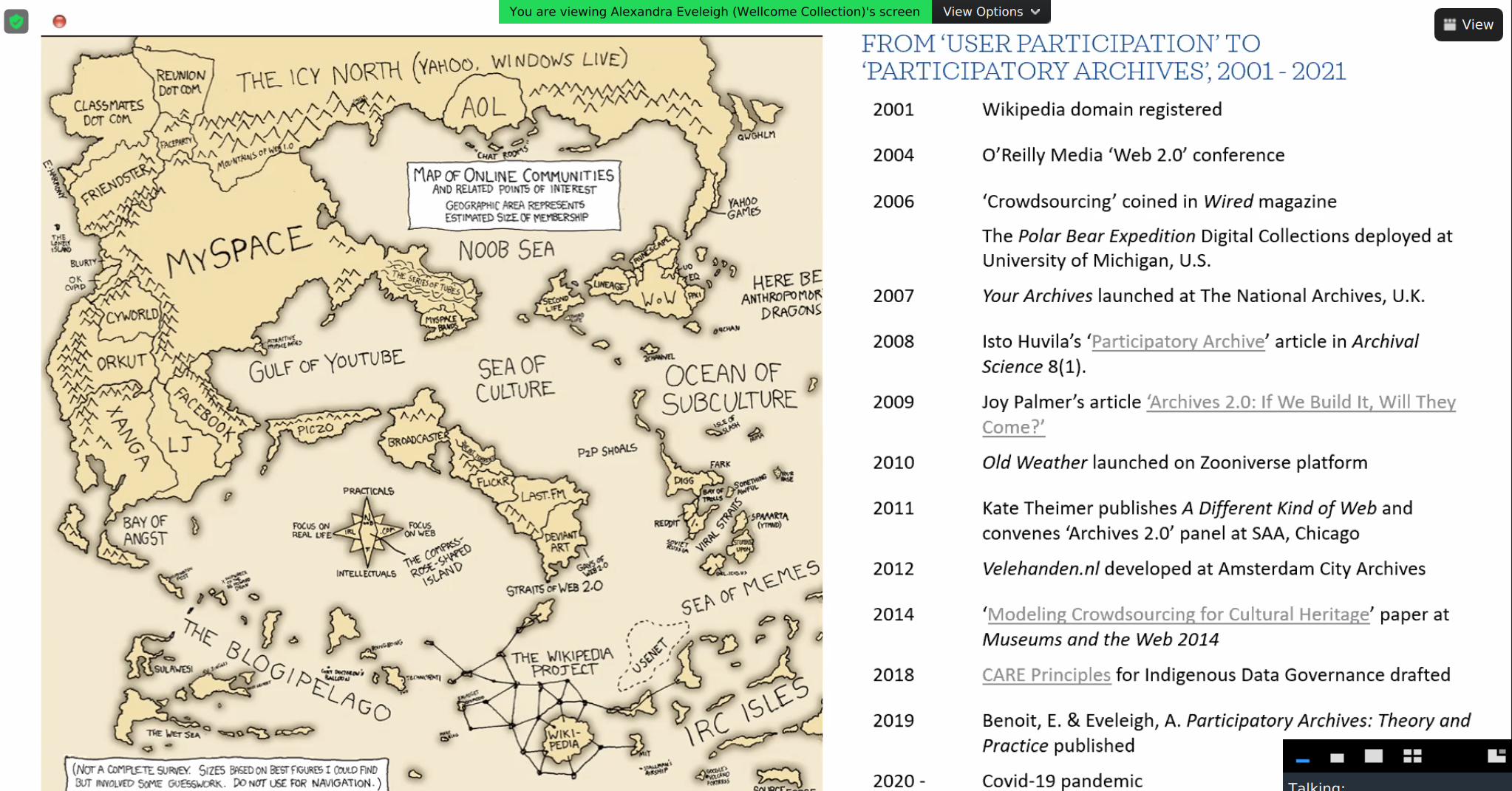 Early on (Palmer:2009?) emphasizes that discussion needs to be focused on benefits, who will benefit and how, rather than on tools themselves. More recent thoughts about crowdsourcing can be found in the new Collective Wisdom: Perspectives on Crowdsourcing in Cultural Heritage which was itself written using a collaborative process as a book sprint.

Projects tend to focus on artifactual outputs: number of pages transcribed, etc. But there has been a shift towards understanding participatory archives in terms of people and communities. Participation isn’t just about adding user generated content, or transcribing … we should be talking about building trust and generating new knowledge, and stimulate critical reflection on record keeping. How we work together (process) is more important than what we are working on. People engage for different reasons, and engagement during the pandemic has exploded in projects like the Smithsonian’s Transcription program.

Participatory strategies need to focus on collaboration and “reciprocal curation” such as LocalContexts. Processes involving communities are equally important to the outcomes. Participation need to be ethical and equitable. This reminds me a lot of what we are trying to do in Documenting the Now with Social Humans labels … to give agency to social media users to shape how their data can be made part of an archive.

10 years ago it was acceptable to ask people to transcribe, today this is usually performed by OCR technology. Although it is increasingly common for people to be involved in the evaluation of algorithmic outputs. Just because a task can be automated does not mean it should be. If not carefully applied AI techniques can introduce subtle biases that alienate particular communities.

Early principles for participatory archives can be seen as having shifted:

There was a good question about who gets to decide what is participatory. Alexandra thought that a decade ago it was the archivist who decided. But today more mature projects allow participants to decide, this is why agile processes are important, because things are learned during the participation.

I asked about how the goals of open access are sometimes at odds with important archival work that needs to be done. Institutions like Wellcome have a clear public mission. Alexandra responded saying that people should check out the CARE Principles which should be read in response or in relation to the open science focused FAIR Principles. Here CARE focuses on:

[Andrew Flinn] started by talking about different paradigms for participation:

When talking about participation Flinn notes that it’s important to recognize the work of Sven Lindqvist Dig Where You Stand, on the significance of documenting your own history. 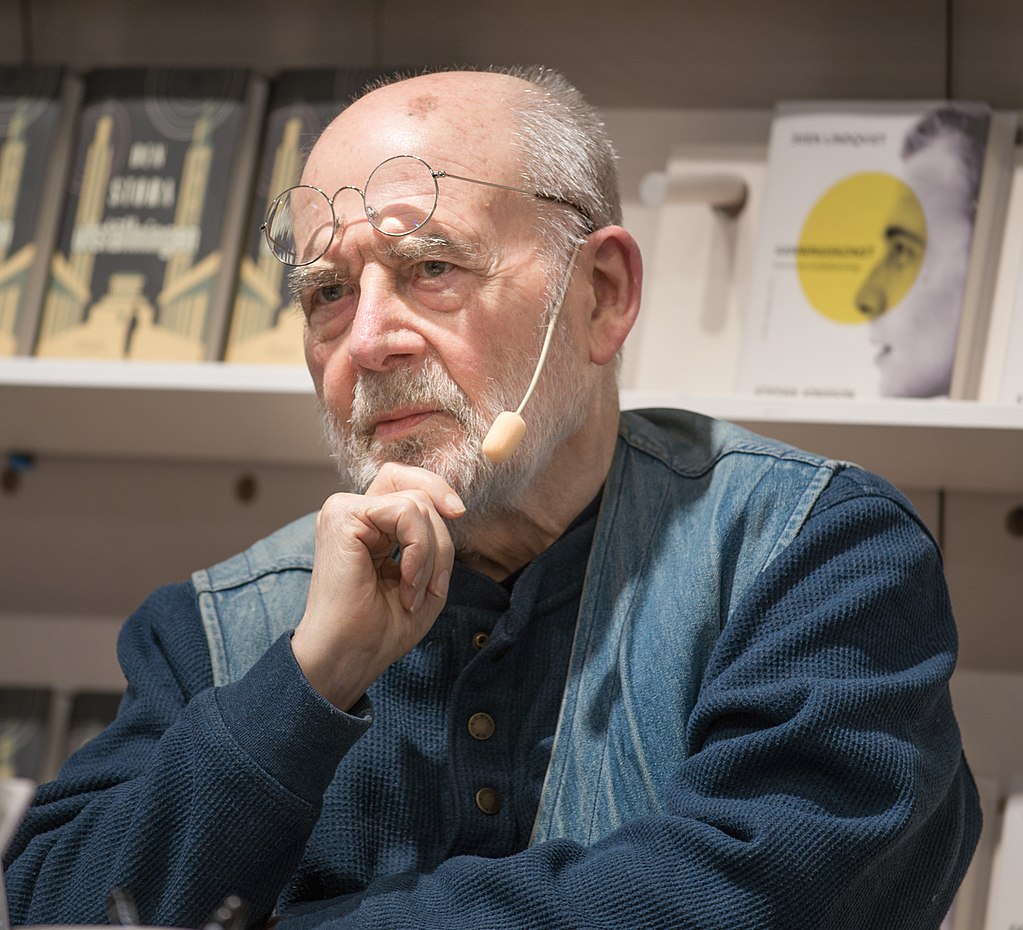 The Swedish connection is interesting, especially (for me) thinking about the impact that participatory design has made in digital work. Of course I thought about how social media offers a way for people to document their own lives in ways that are constrained (and exploited) by the social media platforms themselves.

Flinn gave a series of examples of different community focused archives that embody participatory ideas. I couldn’t really note all of these down, although many were familiar to me (perhaps because I’ve seen Flinn speak before). One new one to me was the MayDay Rooms which is an example of the counter-archive, run by activist communities to document their own activities. The archive is a social resource rather than a repository.

He mentioned the work of the Documenting the Now (which was great) while citing Caswell: 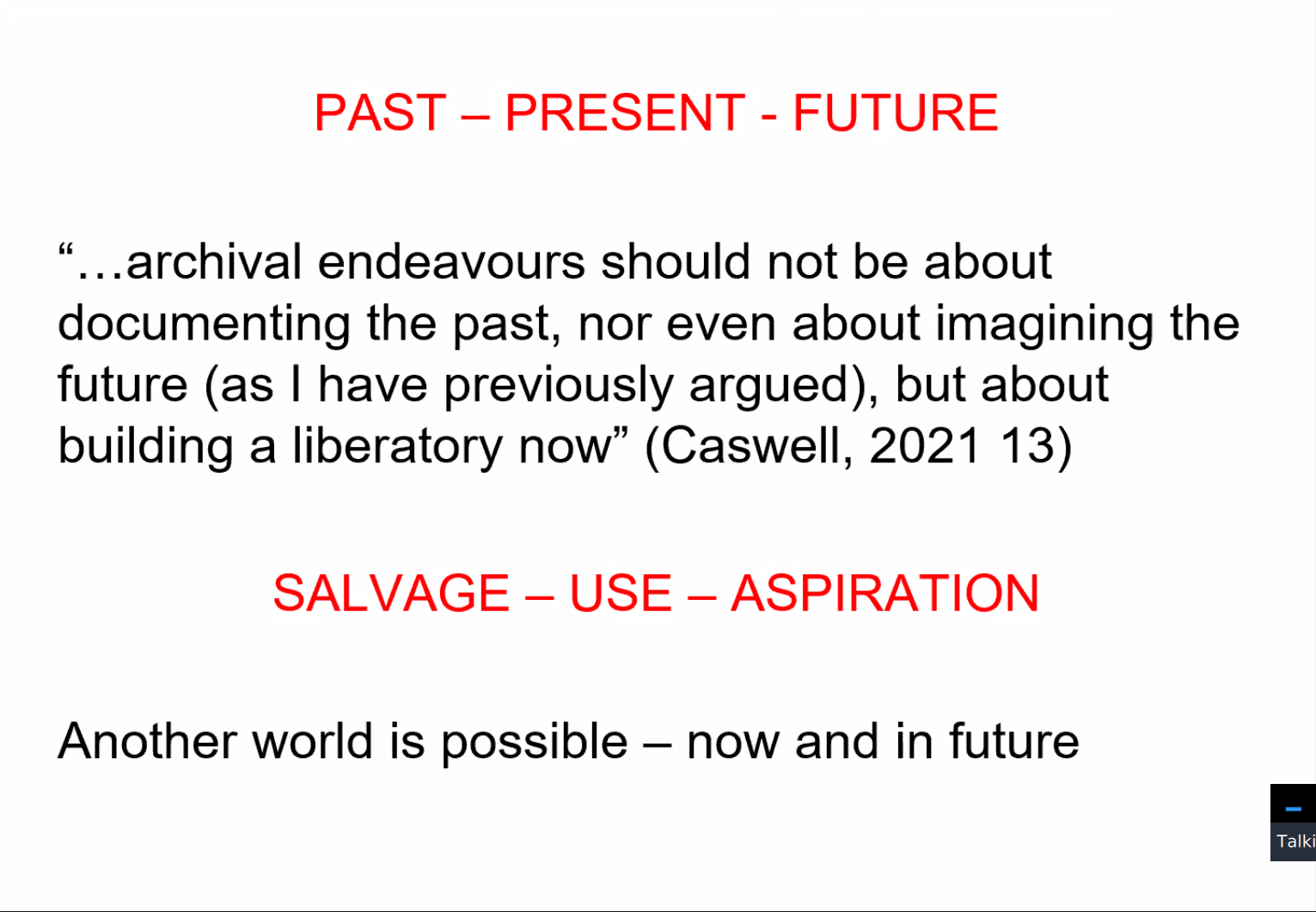 Flinn notes that it’s not an either-or between the past and the now. He points towards ideas of [salvage] and challenging absence. This gets seen in the types of material that are valued. Things that are ephemeral sometimes are devalued: handbills, flyers, posters, programmes, are sometimes the only surviving records.

It was awesome to hear Flinn cite Anat Ben-David’s work, which I was familiar with from the web archiving connection.

Sometimes copyright frameworks constrain the type of participation that archives need to do. Witness are a good example of applying evidentiary practices from archives, but for witnesses of violence. Similar to the work of the Syrian Archive. Counter archives are often personal and affective. Their records are preserved from the threat of deletion and are not removed from the context of their creation. They useful for building solidarity. 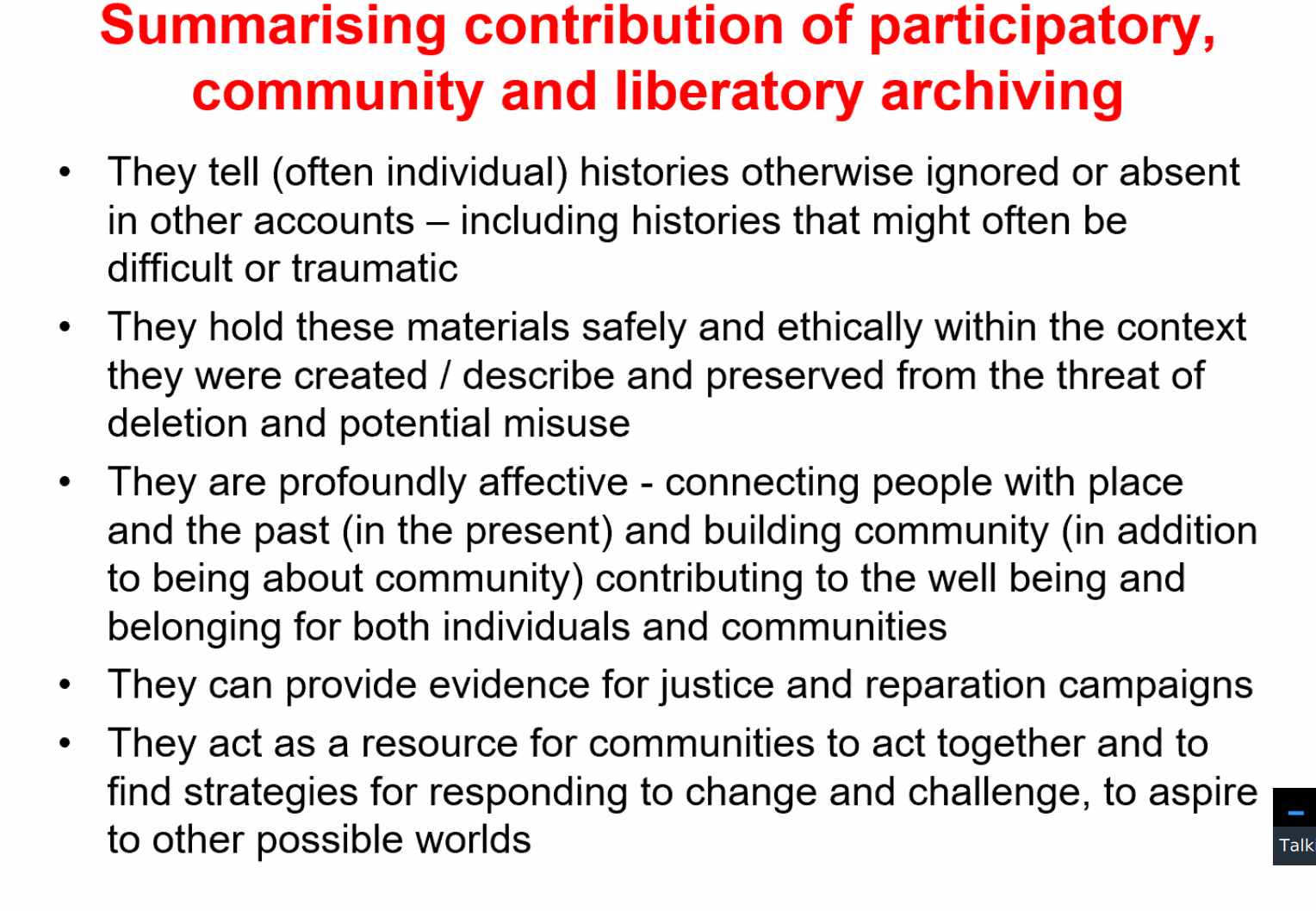 Flinn noted in the discussion period that despite their colonial history archival institutions can be led in the right direction and can be allies. Relationships between community archives and institutions can be important for sustainability of some records. Institutions have a huge role to play when it comes to national narratives. There is a struggle within institutions about these narratives. Equitable partnerships should be pursued, and attention to how funding is distributed is critically important. Funding tends to be focused on projects which are time based, and go to the institution rather than the community. How can we move to more sustainable models that better recognize community expertise and community labor. Also we need to reflect on who we fund and who we don’t fund.

He cited dissertation work by Hannah Ishmael on The Development of Black-Led Archives in London which I want to check out. Elizabeth Shepherd during the Q&A noted that there is quite a bit of similarity between community informatics and the types of counter-archives that Flinn was talking about. Flinn agreed, and that much of this work is happening at Monash where Gillian Oliver is from.

He was asked also whether the role of the digital has much to do with counter-archives. Flinn noted that counter-archives are often hybrid, the digital content starts as informal documentation which shifts into a more archival/documentary mode. The role of platforms, whether people can get their content out of the platforms again, and share it in a sustainable way are a big concern.

Someone asked a question about how to find out about activist archiving. Flinn noted that many of these efforts are specialized and localized. If you are interested in the role of web documents in activism work I encourage you to join the Documenting the Now Slack. We want it to be bigger than just a discussion of Twitter, and welcome participation from all different perspectives.

A note to the organizers (in the unlikely event that they read this): Having an online event about participatory archives where participants can’t chat and use the Q&A is perhaps not the greatest look.